Significance of promoter holding to investors

Every investor dream of attaining optimum returns from the equity market. But in order to fulfil this dream it is crucial 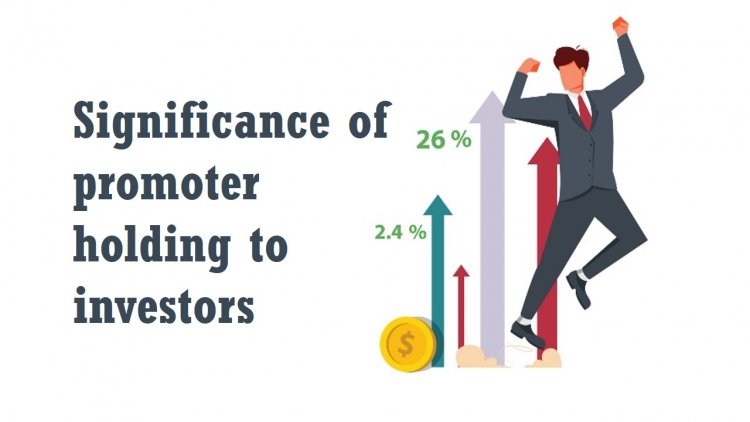 Every investor dream of attaining optimum returns from the equity market. But in order to fulfil this dream it is crucial to excel in stock picking.  Stock picking is a complex task involving analysis of wide range of parameters including business model, earnings trend, company’s strength relative to its peers, key ratios like debt to equity, price to earnings, dividend history and shareholding pattern. The shareholding patterns details about promoters’ stake, share of the foreign and domestic institutional investors, retail investors etc. Among all of these it is the promoter’s holdings is vital since gives useful insight about company’s prospect and impact’s overall stock sentiment. But just a higher promoter stake is not a buy signal for a stock. There are several key aspects related to promotor’s holding which needs to be evaluated before investing. We attempt to discuss this in detail in this article.

A promoter’s holding refers to shares owned by the promoters of the company. It could be single promoter or few promoter family members who had a major role in establishing the company and/or has control over functioning. The information can be easily obtained from the stock exchange, financial websites under company profile. The promoter’s holding tends to vary across companies. Like for instance as on March 2022, the promotor’s holding in Infosys, Reliance, Hindustan Unilever, Kotak Mahindra Bank was 13%, 51%, 62% and 26%, respectively. There are also companies such as ITC, HDFC and ICICI Bank which are have zero promoter holdings.

Although higher promoter holding is a positive sign because promoter take decisions which aims to enhance the performance of the company as he/she himself owns a larger stake. This in turn instils investors confidence and encourages them to invest in such companies.  A low promoter stake on the flipside is not always negative since such companies could have higher stake of the domestic and foreign investors.

Increase in the promoter’s holding over a period of time is often cheered by the investors as it could have positive influence on the stock performance. Decrease in the promoter holding over a prolonged period should not be viewed in isolation. It is crucial to look at the reasons about why is promoter selling shares. Promoter could be selling stake to investing in new company or ventures. Often promoters rising interest outside of the listed company raises concerns on how much time and efforts he/she will put in the current business. Promoter stake might be decreasing in the company but there might be higher domestic and foreign investment which is healthy sign. Hence, decreasing promoter stake is not necessarily bad. It is important to evaluate all the other aspects.

In addition, while analysing promoter’s stake check the number of shares pledged by the promoter. Promoters might pledge their shares to raise money for themselves or company to fund working capital requirements, pay debts by keeping shares collateral for getting a loan from a bank. While pledging should not be looked as negative indicating that company don’t have strong financials. But pledging significant portion of the shares can be alarming and impact the shareholder’s value.

Other key aspects of the promoter’s holding to analyse

Analysing promoter’s renumeration including his/her fixed and variable pay is essential as there are times a promoter will take low compensation as they would enjoy appreciation on the stock and promoter focuses on increasing the shareholders’ value. Besides, promoter reinvesting the his/her dividend into the company is a sign that he/she is not focus on short term gains but trying to improve the long-term performance of the company.

A promoter’s holding is crucial factor to find out whether the stock is worth investing or not. But it is the only factor that determines the fate of the company. Promoters’ holding should be view in line with host of other parameters. It is crucial to evaluate the promoter’s stake trend and also there is not any drastic increase or decrease as it could impact the stock performance. Evaluation of the promoter’s holding will help an investor to take prudent investment decision. Happy Investing.

7 Important things to check before buying a health insurance plan

What is small case investing? And its Uniqueness...

How an investor can look Average Maturity for his investments and How...